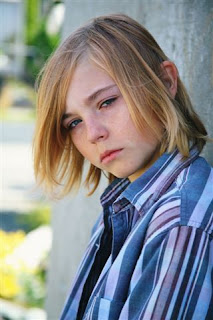 Look at how cool this Seattle Talent kid is! This is Chase Vanek, a great young actor from our Seattle studio. Chase, along with his sister Tori (who is a really great kid too), has been with us for about three years now, and has quite a few fun things happen. The huge job he just got was a strong supporting role he has in the new film directed by Rob Zombie, Halloween 2. Chase plays the young Michael Myers, and had fun playing such a creepy role. Chase got the role because the boy who played the role in the first Halloween, an actor named Daeg, had grown to old. Daeg is a Seattle Talent client as well, from our San Diego office, he was also in the film Hancock. Chase and his mom spent five weeks down south filming, and had a blast. In addition to already being in two national commercials (for Honda and for Microsoft), he also in a fun new kid-friendly independent film "Dear Lemon Lima", the trailer looks hilarious.  It is being introduced at the Los Angeles Film Festival.  Chase is signed with a great Seattle Talent Agency, Sterling Talent, and is also with Laura Lichen Management in LA. Chase, and his sister, are excellent examples of the kids we love to work with at Seattle Talent, and we are so proud of his successes.
at 6:15 PM